In case you haven’t heard of the Climate Change Commission or had time to read the 180 page 2021 Draft Advice for Consultation report, we have put together this brief on some of the main points.

What is the Commission?

The Climate Change Commission is an independent Crown entity that advises the New Zealand Government on climate change action within the framework of the Climate Change Response Amendment Act.

What is this Act?

The Climate Change Response (Zero Carbon) Amendment Act 2019 (the Act) came into force on 14 November 2019. It provides a framework for reducing emissions by 2050 and achieving a climate resilient future. This includes the establishment of an independent Climate Change Commission.

What is the Commission’s role?

The commission’s role is to provide independent expert advice to the Government and to monitor and review its progress towards emissions reduction and adaptation goals. This means it will have a significant role in guiding New Zealand’s economic transition towards a low emissions economy.

What is the core advice the Commission is providing through the report?

How does this relate to our international obligations under the Paris Agreement?

The Paris Agreement is the new global agreement on climate change. The purpose of the Paris Agreement is to keep the global average temperature well below 2° C above pre-industrial levels, while pursuing efforts to limit the temperature increase to 1.5° C. New Zealand committed to reducing net emissions by an average of 30% from 2005 emissions levels over the 2021 – 2030 period.

No. The Commission determined if we are to play our part as a developed nation we would need to commit to emission reductions of much more than 35% below 2005 levels by 2030.

What’s next for the Climate Change Commission?

The submission period has now closed. Once submissions have been taken into account the final recommendations will be released on May 31. The Government has until the end of the year to accept the Commission’s proposed budgets or come up with its own and to create an emissions reduction plan for meeting the budgets.

What is Purpose Capital’s view?

The Intergovernmental Panel on Climate Change (IPCC) the United Nations body for assessing the science related to climate change has signalled the international actions required to avoid catastrophic climate change will require “rapid, far-reaching and unprecedented changes in all aspects of society.” We expect most submissions will seek to reduce the changes required.

Therefore, the Commission should not specify a pathway of least disruption. The Commission should set the level of ambition and budgets needed to meet our UN target by 2030 and zero net emissions by 2050. We hope the Labour government and its leader who declared climate change to be her generation’s nuclear free moment, will have the courage to take up this challenge.

The size of the challenge?

On an international scale:

Net-zero carbon dioxide by 2050 would require the deployment of ~1500 wind turbines (2.5 MW) over ~300 square miles, every day starting tomorrow and continuing to 2050. The figure below illustrates the challenge. 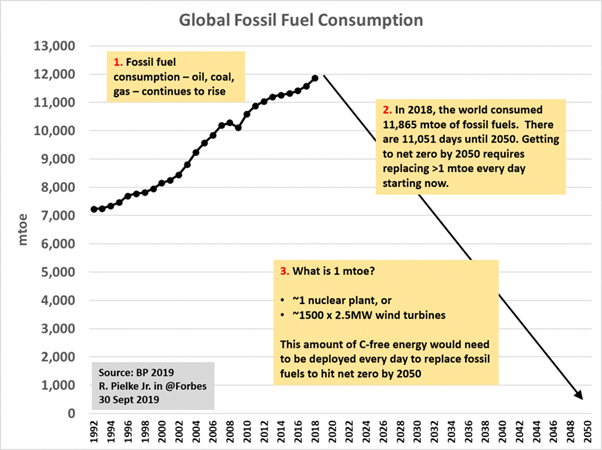 The scale of the challenge to achieve net-zero carbon dioxide emissions in 2050. ROGER PIELKE JR., BP 2018

Purpose Capital is an impact investment fund whose mission is to drive social and environment change. If you have a project or are an existing business that aims to address climate change issues and are looking to raise value-aligned capital, we’d like to hear from you. Click the button below to get in touch.